I'm on Pinterest! Check out my photo boards at http://pinterest.com/tillmanskates

Who Let the Dogs Out, Season II Premieres on Hallmark Chanel Feb 1st

Remember Lucca, the hero dog from the Rose Parade? You can see her THIS FRIDAY February 1st on the season premiere of Who Let the Dogs Out on Hallmark Channel.

The premiere episode is an all new hour of TV honoring Military Working Dogs. You'll get to go behind the scenes of the Rose Parade, get to meet Lucca and her history as a military working dog in Iraq and Afghanistan. This is a very moving episode, so be sure to tune in.
This episode also includes the story of my Boot Camp training and how I became an honorary Marine. I traveled to Dallas for my induction, where I received my uniform "stripes".  The announcer teased me about being a little fat...FAT? Those rolls are muscles around my neck, or at least that is what I like to say.

I also got to attend SkyBall in Dallas, Texas, an event that honors all of our nation's Military service members, Veterans, and their families, including Lucca! I hope you are as excited as I am about the premiere episode of Who Let the Dogs Out. Special thanks to my sponsors at Petco who are great to work with on this show! Be sure to stop by your local Petco store and pick up some of my Tillman's Treats, or better yet, the new Natural Balance Jerky Bars with special limited edition Monument packaging. Proceeds of those go to help fund the national monument to Military Working Dogs.

Posted by Tillman at Thursday, January 31, 2013 No comments:

Check out some of the pawsome prizes I'll be giving out during my Live Twitter Parties. Use hashtag #TillmanTV

Posted by Tillman at Wednesday, January 30, 2013 No comments:

Email ThisBlogThis!Share to TwitterShare to FacebookShare to Pinterest
Labels: Who Let The Dogs Out

Get Yer Badgers & Banners Here for Who Let the Dogs Out

In the last few days I've heard from lots of fans of Who Let the Dogs Out, asking if they can write a blog post about the show, get some video clips, etc. We will be adding more content for you at the show website.

In the meantime, if you want to use any of these banners or badges for your own blog, simply click on the image, "save as" and then post to your site. The only restriction is that you link that image back to www.WLTDO.tv

Here are the banners: 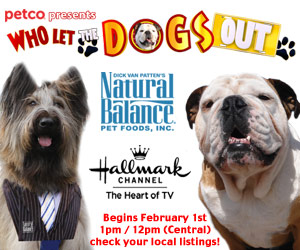 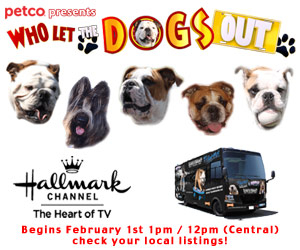 Posted by Tillman at Wednesday, January 30, 2013 No comments:

Email ThisBlogThis!Share to TwitterShare to FacebookShare to Pinterest
Labels: Hallmark Channel, Petco, Who Let The Dogs Out

Check out Hallmark Channel, my new home on TV

Check out this promo video of the show from the good folks at Hallmark Channel:


Will you watch my show? The premier is this Friday, February 1st at 1 pm, 12 pm Central. Check local listings. If you will be at work or school, be sure to set your DVR to record the show. I'll post more inside scoop on the show tomorrow, so check back!

Set Your DVRs, I'll Be Back on TV!

The countdown has begun! In just one week from today I'll be back on TV with the second season of 'Who Let the Dogs Out'.  The show is a Hallmark Channel Original Series, and will air Fridays on Hallmark Channel. Check your local listings for times, it runs mid-day, but will be repeated on weekends on Hallmark Movie Channel as well.

Who Let the Dogs Out is presented by Petco, and sponsored by Natural Balance Pet Foods, along with Flexi leads, and Nylabone products. I'm grateful to my sponsors for making the show a reality (pardon the pun). Being a famous bulldog isn't easy. I have lots of fan mail to answer, people pawing at me to pet me, and not to mention all those red carpet events I attend. My proudest moment yet, was when I became an honorary Marine, with the hope to help raise awareness of military working dogs and the new National Monument to Military Working Dog Teams. This, along with the recent Rose Parade float by Natural Balance is all included in the one-hour premiere of Who Let the Dogs Out, which starts on Friday February 1st on Hallmark Channel. Since many of you will be at work during the day on Fridays, I'm depending on your to set your DVR to record my show, so you can watch it later. Don't miss  single episode, so set it up to record every episode. Let your friends and family know to do the same, I'm hoping to get extra belly rubs if the show is a hit in the ratings! So start the countdown, I'll be back on TV starting February 1st!
Posted by Tillman at Friday, January 25, 2013 1 comment:

Email ThisBlogThis!Share to TwitterShare to FacebookShare to Pinterest
Labels: Hallmark Channel, Who Let The Dogs Out

Dad and I took some time off for good ole fashioned rest and relaxation. Having rode on the Natural Balance Rose Parade Float honoring 'Canines with Courage' I got to meet some true heroes, such as Lucca, the three legged dog who served in Iraq and Afganastan. We got along well, I didn't growl at her at all. I figure not only does she outrank me (I'm just an honorary Marine) but she served in actual combat and deserves my full woof-spect. In doggie world, we understand these things.

So after the Rose Parade I relaxed at home just being a family dog. Sleeping late, watching TV, and playing pranks on my dad. I've kept in shape with regular exercise but I confess I've been snacking on those Natural Balance Jerky Treats that honor Military Working Dogs (made in USA too). I like the Duck flavor best...but dad says proceeds go to help fund the National Monument to Military Working Dogs so if you see them at Petco pick up a bag or two. Pick up one for me too, I love 'em. You can find them in my online fan shop or any Petco store nationwide. 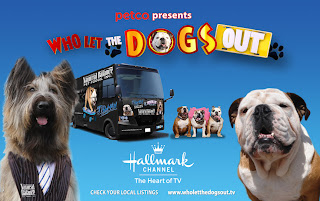 After an enjoyable few weeks off, now its back to reality....TV that is. Yep, my reality TV show Who Let the Dogs Out returns to TV on Friday February 1st on Hallmark Channel. The good folks at Hallmark Channel ordered 16 new episodes of Who Let the Dogs Out, and here is the really great news: if you missed any of the first season, they will also be re-presenting the entire season one as well. I'm not a math genius but that's 26 episodes of me on TV. Woo Hoo!
Here's what you can do: Set your DVR to record Hallmark Channel so it records the entire season for you. PS- It is a family-friendly program so its a kid safe option as after school TV entertainment.
Let's get back to reality...TV.  The first episode is all about military working dogs the incredible Natural Balance Pet Foods Rose Parade Float, so you don't want to miss it.

Posted by Tillman at Saturday, January 19, 2013 No comments:

A Lazy Saturday with Dad 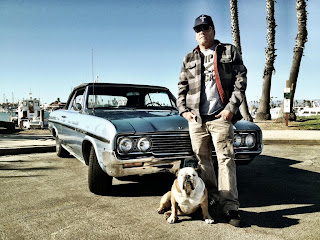 Ahhh at last a lazy Saturday. I love those days, don't you? I'm just hanging out all day with dad. We'll probably go for a ride by the beach today, with the top down, maybe cruise for chicks. Nothing I like better than to have my neck scratched. You see, lots of chicks think I'm cute, so they "ooh and awwww" over me. I smile and nudge them a little. My dad is in on it, and will say something to them like "you can pet him if you want". Then they lean down and start. Ahhhh, that's it, right there. Scratch my neck. It's a perfect way to spend a lazy Saturday, don't you think? What do you have planned with your four legged friend this weekend?

Posted by Tillman at Saturday, January 12, 2013 No comments:

Check out this video clip of the heartwarming reunion of the Military family at the Natural Balance Pet Foods Rose Parade float on New Year's Day:

Posted by Tillman at Wednesday, January 02, 2013 No comments:

A Military Family United at Rose Parade, thanks to Natural Balance Pet Foods

Whew, I'm tired today! The Rose Parade yesterday was a lot of fun with lots going on. My pals at Natural Balance Pet Food really did a pawsome job making this year's Rose Parade float even more special than ever.

Hopefully you saw that amazing reunion between Army Sgt. 1st Class Eric Pazz (who is currently deployed in Afghanistan) when he was reunited with his wife, Miriam, and son, Eric Jr., at this year's Rose Parade thanks to Dick Van Patten's Natural Balance Pet Foods, Inc. That's me in the picture with them. I'm wearing my own Honorary Marine uniform! Also in the photo is Gunnery Sgt. Christopher Willingham and Cpl. Juan Rodriguez with Lucca, a Military War Dog hero who lost her leg protecting her fellow Marines during a routine mission. Lucca is one incredible dog, a true hero. Agree? Let your friends know.
Posted by Tillman at Wednesday, January 02, 2013 1 comment: 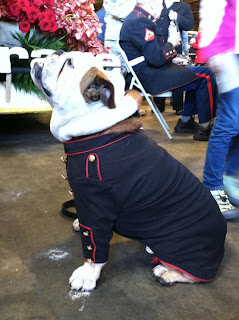 Today was an amazing day at the Rose Parade.  This was my fifth year of riding a float in the famous Rose Parade. My pals at Natural Balance didn't set out to break any new Guinness World Records for the longest, or heaviest or biggest, but instead, they wanted to honor Military Working Dog teams. They teamed up with Petco to help fund a new National Monument to Military Working Dog teams, so the float's theme for this year was Canines with Courage and featured a floral replica of the monument.

Now that I am an honorary Marine, I thought it was best to set aside my skateboard and instead wear my uniform to help raise awareness for, and to honor the Military Working Dogs. I had the honor of being in great company--some of the coolest military working dogs who are also true heroes. These dogs have saved lives every day for Americans and our soldiers. 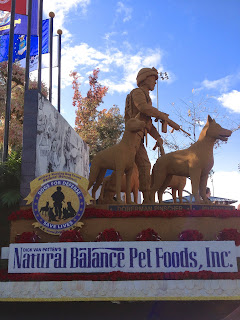 Check out this photo of the Natural Balance float...you can see the floral replica of a dog handler soldier and dogs that will be installed in bronze and granite on the new National Monument to Military Working Dogs.

It was a true honor for me to stand with these dogs to give them the honor and respect they deserve!

I love this photo below. At the post-parade event today, I sniffed out the bronze statues of the new monument, which were on display for the public to see. I barked a good "hello" and saluted Lucca, the brave hero who served in Afganastan and Iraq. We're standing in front of the actual bronze statues that will eventually become the full monument later this year. 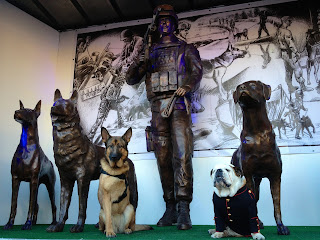 Did you see the Rose Parade? Let me know what you think!
Posted by Tillman at Tuesday, January 01, 2013 2 comments:

Watch me on TV on The Hallmark Channel 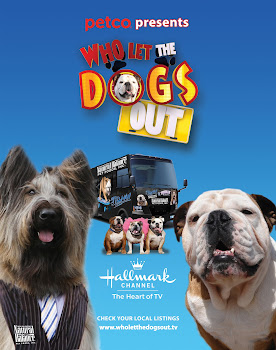 Thursdays at 1 pm. Set Your DVR to record the season! 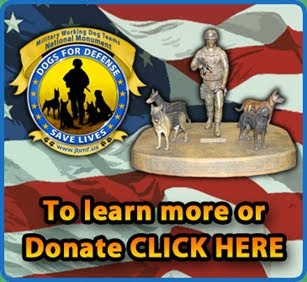 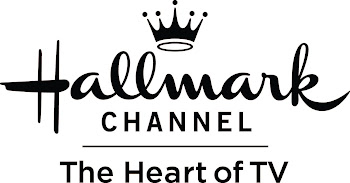 Natural Balance Pet Food is what I eat! 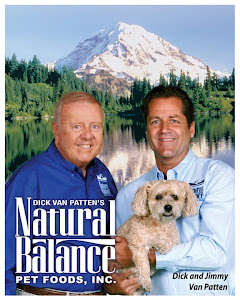 This is my favorite food! Woof!!

Thanks to my sponsors! 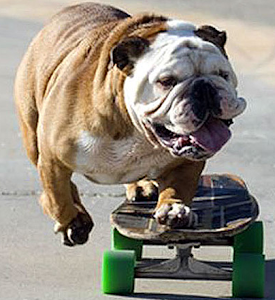